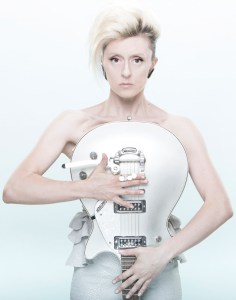 CASSANDRA is an italian “pop art” artist sui generis. She’s a multi-instrumentalist (she plays guitars, ukulele, synthesizer, drums), a songwriter and producer. She uses music as a tool to express her personal artistic mood, made of colors, strong lyrics, changing sounds, ranging from electronics to punk, from folk to rock.

“She has a natural jazzy and blues attitude which shines through her voice” declared the famous jazz musician David Amram performing with her, during one of his special concert in Bari on October 2011.

Author of all her songs, her first album “La valigia con le scarpe” (Leave Music/Universal) contains awarded songs by critics and the public of the most important national awards for Italian songwriter: MUSICULTURA 2013, BIANCA D’APONTE AWARD 2012, FABRIZIO DE ANDRE’ 2013 and a NOMINATION as Best Album debut of the Year 2014 for TARGHE TENCO. In 2010, Cassandra auditioned for X Factor Italy. She was selected together with other 11 contestants to perform at the live shows. Her mentor was Elio from the famous Italian band Elio e Le storie Tese.

“CHAGALL” is the title of her second album, which also features contributions from the bands Elio e Le storie Tese, Brunori Sas and the Nico and The Red Shoes (France).